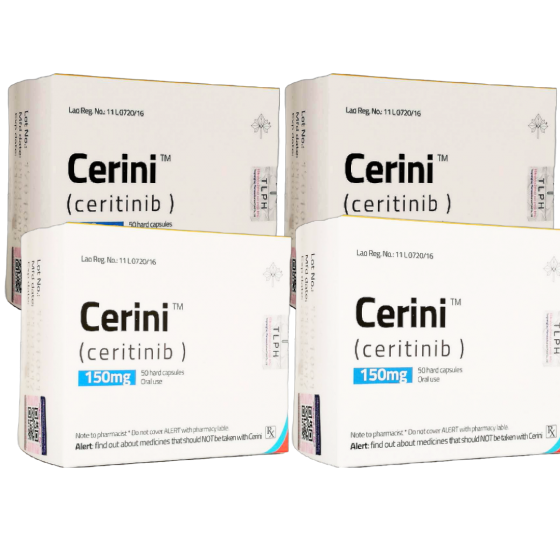 The severity of the response, as described in Table 1, withholding Ceritinib and reducing the dose to resume, or permanently discontinue Ceritinib.

When possible, avoid ceritinib in patients with congenital long QT syndrome. Congestive heart Patients with visceral failure, bradyarrhythmia, electrolyte abnormalities, or patients with drugs known to prolong the QTc interval Monitor electrocardiograms (ECGs) and electrolytes regularly. QTc for at least 2 separate independent ECGs Patients with an interval greater than 500msec will not be given Ceritinib until the QTc interval is less than 481msec or recovery To baseline, if the QTc interval is greater than or equal to 481msec, then as described in Table 1 Repeat CERITINIB. When the patient develops QTc interval prolongation and torsion point [Torsadedepointes] or more Shaped ventricular tachycardia [polymorphicventriculartachycardia] or severe arrhythmia Permanently discontinue Ceritinib with a combination of signs/symptoms.

According to laboratory values, it occurred in 13% of 255 patients. In patients with diabetes or glucose intolerance

The risk of CTCAE grade 3-4 hyperglycemia increased 6-fold and the risk of corticosteroids increased 2-fold.

Monitor serum glucose levels when clinically instructed. When directed to start or optimize anti-hyperglycemic drugs. According to not

Severity of good drug reaction, withhold Ceritinib until hyperglycemia is properly controlled, then as described in Table 1

Reduce the dose and resume Ceritinib. If it cannot be treated with drugs to achieve proper blood glucose control, terminate permanently Ceritinib.

Bradycardia may occur in patients receiving Ceritinib. In Study 1, sinus bradycardia was determined

It means that the heart rate is less than 50 beats per minute, which was noted as a new discovery in 1% of 255 patients. In study 1 3%

Avoid using Ceritinib and other drugs known to cause bradycardia (eg, beta-blockers, non-

Monitor heart rate and blood pressure. In case of symptomatic bradycardia is not life-threatening, Ceritinib is not given until recovery

Return to asymptomatic bradycardia or to a heart rate of 60bpm or above, evaluate concurrent drug use, and adjust

The dose of ceritinib. If the drug is not identified at the same time, the life-threatening bradycardia is permanently terminated

Ceritinib; however, do not give Ceritinib if it is associated with concurrent medications known to cause bradycardia or hypotension

Until asymptomatic bradycardia is restored or the heart rate is 60bpm or above, and if the medication can be adjusted or end

Stop, as described in the table, resume Ceritinib at a reduced dose to asymptomatic bradycardia or to a heart rate of 60 bpm

Or more, with frequent monitoring.

According to its mechanism of action, Ceritinib may cause fetal harm when administered to pregnant women. In animal research

In the study, the maternal plasma exposure of rats and rabbits administered with Ceritinib during the organogenesis period was lower than the recommended human maximum dose.

The amount of 750 mg per day can cause skeletal abnormalities in rats and rabbits. Advise women of reproductive potential of the potential risk to the fetus

harm. Advise women of reproductive potential that Ceritinib is effective during treatment and at least 2 weeks after completion of treatment

More Ads From This Supplier

Login By Phone Vcode is not enabled!